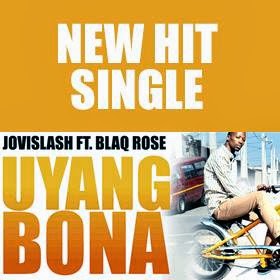 ﻿
Jovislash   has been featured on our pages ever since his impressive performance from Back2TheCity Festival earlier this year. A performance that left me wondering why on earth would hiphop die when such talented artist like Jovislash exist. Since then, Jovislash has been hella busy with collaborations  and  added to his credibility a nomination from Hype Magazine as one of the Hottest Newcomers Delight Rappers. The hiphop hustle has its rewards .
Jovislash returns to our pages with a fresh joint "Uyang bona" cut off his forthcoming single. The single covers his everyday living as a rapper on the grind, the loss of his mother, the thrill of being acknowledged by fans out there and the satisfaction of watching his musical/hiphop ideas take shape.
Dope video quality with best vocals coming from the Blaq Rose.
Fans should be on the look for more fresh singles coming from the talented Jovislash
Watch video
Uyang bona