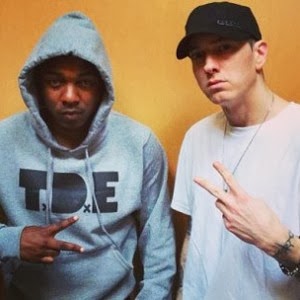 
I don’t usually fux with Eminem as he’s either frustrated or  way messed up, then again I never resist a track that has Kendrick Lamar’s name  on.  Eminem featuring  Kendrick Lamar – Love Game

Despite his floss and anger, Eminem is still regarded as one of the best top 5 hip hop artists according to the charts. His new project, the Marshall Mathers L P 2 has just made history by making him the first person to have 4 songs i.e “Berzek ”, “survival ”, “Rap God “, and his latest favourite “The Monster" all locked up under the top 20 charts.

Took a moment and listened to  “The Monster The Monster ”, it’s a bit of rave and more commercial. Makes sense why it’d be a chart topper.

After 13 years of falling off, Eminem seems to be on the right track.