HipHop Culture according to Juice 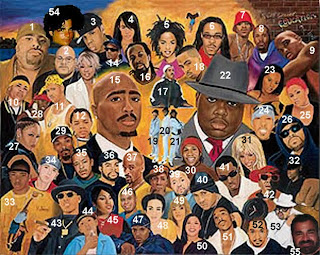 Whatever happened to HipHop? I know I'm not the only 1 who feels that this so-called evolution of the movement is simply going the wrong direction. Can you picture how things would be if 2Pac, Biggie, Big L, Freaky Tar & Big Pun were still alive? Imagine Biggie stopping to wear his beloved DKNY jeans and going for skinnies. Can you imagine Tupac signing to Young Money? Can you possibly see anybody claiming the throne of New York if Big L was still around? You see, there is sadness to this; the more you think about it, you might realise that certain people had to go in order for some to come in.

When Nas said HipHop is Dead, might he have in reality been referring to the demise of some of its truest soldiers? The reason we still don't know who killed Biggie & Tupac might easily be because those very same people are the powers behind the ignorance we see on MTV & hear on radio. More than enough wise people have alerted us about content-control that most record labels will want to have on their art; which then gets directed towards depreciating the knowledge & wisdom of (black) people across America & the world. Kids now either want to be rappers or athletes simply because they see it as a way to come out of poverty; not because they want to be socially-conscious. What value other than money do artists such as lil wayne, 2chains, wiz kalifah and their close peers teach to the community? Then you look at artists such as Mos Def, Jay Electronica, Skyzoo, Talib Kweli, Common, Rapsody and others; why are these educators not listed at priority by media?

It's a simple & sad science of manipulation; where the most powerful are only content when they see the meek get poorer. A case where the sentiment "Blacks don't read" are made to seem believable.

This is not even about America, the same influences can be seen in South Africa as well in cases where great songs are put on albums but they never get to see the light of day. A perfect example for me will always be Darfur from HHP's Acceptance Speech; a great song which could easily be a catalyst for campaigns to save lives, but it never saw a light of day and people opted for a less significant Music and Light. Though Jabba got his "what would SAMA be without Jabba", I feel that he & Tumi's song could have taken both of them further as humanitarians.

There is a bottom line to all of this, it is time that Hiphop takes ownership on the wellness of the people who are its target market. There are enough problems and corruption in the world for us to just lay down and accept mediocrity in art. Stand Up & be about the people, ALL else, including the money you seek will follow!!