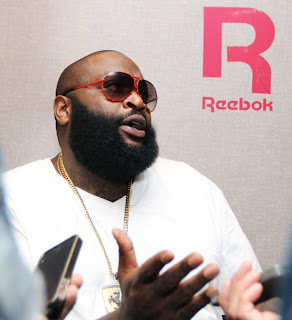 Life just got real for Rick Ross. Reebok just dropped the rapper over lyrics in one of his songs that suggestively supports rape, *rolls eyes* shame.
Rick Ross has been taking serious heat for his rape lyrics in the song “U.O.E.N.O.” He tweeted pseudo apologies that only seemed to make his blunder worse.

One tweet read, “I dont condone rape. Apologies for the #lyric interpreted as rape. #BOSS” The other tweet was no better:

Apologies to my many business partners,who would never promote violence against women. @ReebokClassics @ultraviolet"

Ross’ lyrics bragged about slipping drugs into a woman’s drink and taking her home to have sex with her while she was under the influence and unable to say no.

oh well!! Reebok told the media, “Reebok holds our partners to a high standard, and we expect them to live up to the values of our brand.  Unfortunately, Rick Ross has failed to do so.” Reebok went on to say,  “While we do not believe that Rick Ross condones sexual assault, we are very disappointed he has yet to display an understanding of the seriousness of this issue or an appropriate level of remorse.”